Galen McNamara, CEO, stated: “We are off to a strong start at Mogollon and the team is excited to continue testing the Queen Vein around the old Consolidated Mine where visual results so far have suggested the presence of significant mineralized zones. Meanwhile at the Hughes Project, drilling is scheduled to begin shortly. At both projects, drilling will be concentrated on testing veins with known high-grade mineralization, mostly on a step-out basis. We look forward to releasing assay results from both projects as they become available.”

The focus of the ongoing drill program is testing un-mined extensions of the Consolidated Mine, centered on the north-trending, epithermal-related Queen Vein (see October 15, 2021 News Release). Holes on 50 to 100 meter centers are designed to systematically test the lateral and vertical continuity of mineralization over a strike-length of approximately 500 meters and near-vertical, down-dip extent of over 300 meters beginning at approximately 130 meters below surface.

Broad zones (up to 50 meters) of epithermal-related alteration, veining, brecciation and mineralization, cored by the Queen Vein, was intersected in all holes. Hole MOG21-03 was terminated in mineralization due to the intersection of historic workings after unexpected and strong deviation of the hole during drilling. The hanging wall to the Queen Vein consists of silicified and brecciated andesite and rhyolite cut by zones of colloform-banded chalcedonic quartz veins increasing in frequency with depth towards to the Queen Vein. The Queen Vein is highly-complex with evidence for multiple epithermal-related fluid events that formed calcite + quartz veins, quartz-rich breccias with bladed quartz, colloform banding and local silver-bearing sulfides. The footwall to the Queen Vein consists of intensely silicified and brecciated andesite with locally abundant silver-bearing sulfides as disseminations and banded within chalcedony-rich veins.

Lithological and structural data from these holes and subsequent holes are also being incorporated into the geological model to help target high-grade zones along the vein system. 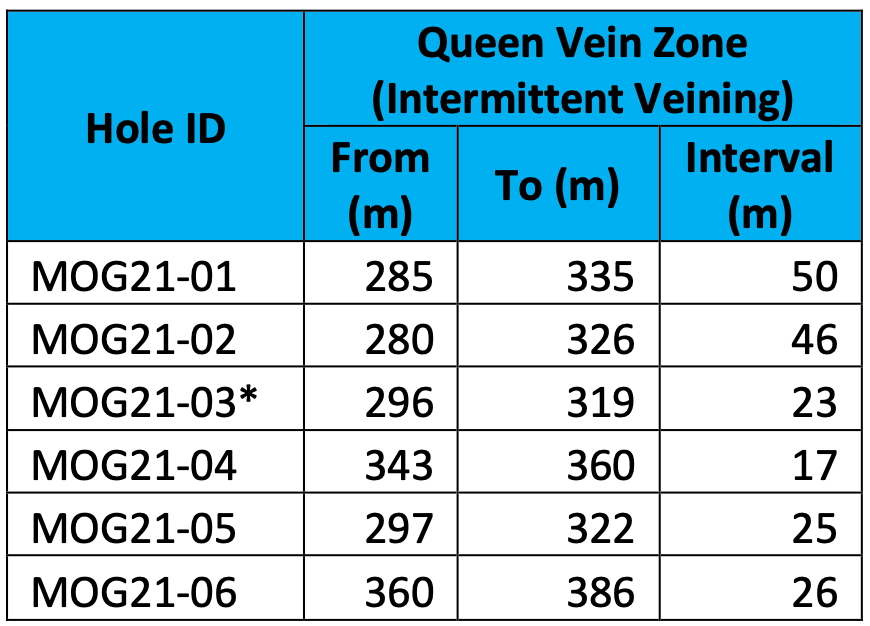 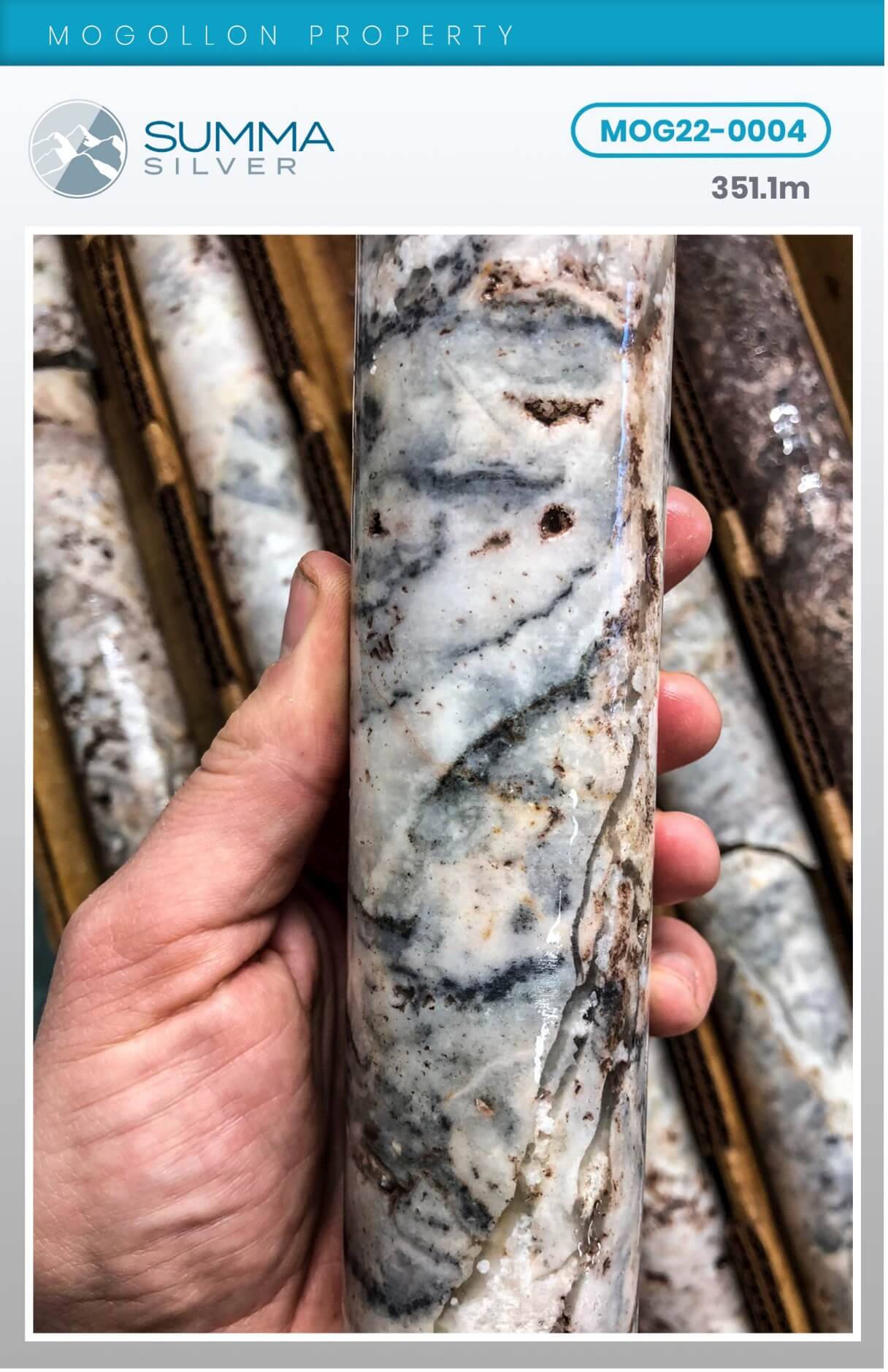 Figure 1: Example of mineralized core from the Queen Vein in MOG22-04 at 351m. Banded and brecciated quartz vein with disseminated and banded silver sulfides. 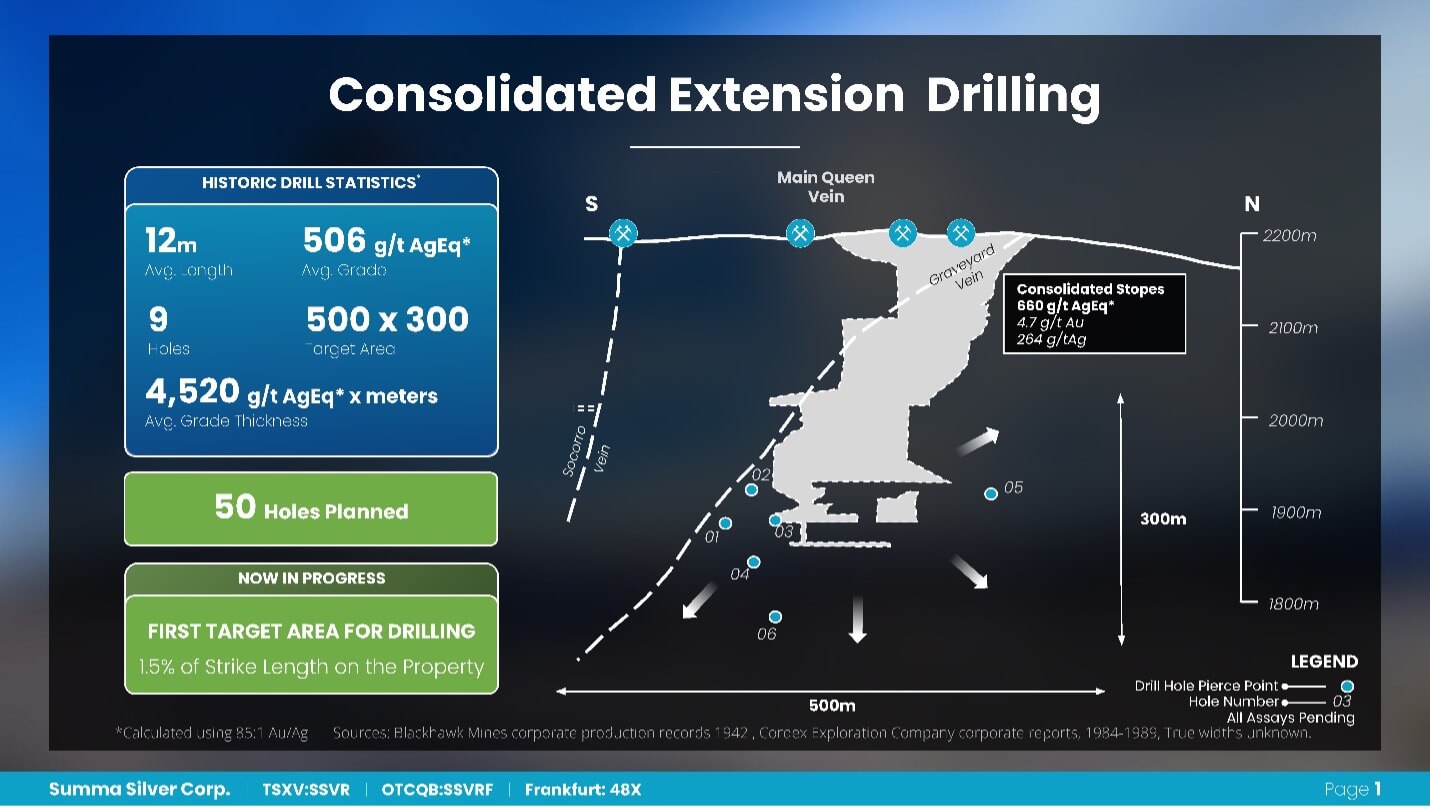 The 2,467-acre Mogollon Property is located in the historically prolific Mogollon mining district of southwest New Mexico, approximately 120 km north of Silver City. Numerous underground workings have exploited high-grade gold and silver veins from three primary mines; Fanney, Last Chance and Consolidated. Mining ceased in 1942 and the district has since been largely inactive other than a few exploration drill programs in the 1980s and in 2010; totalling 15,600 m. The property hosts approximately 34 km of near-continuous epithermal-associated veins and faults where only 1.7 km of those veins and faults have been drill tested. The Mogollon Property therefore offers a unique opportunity to systematically explore for new discoveries near historic past-production.

The technical content of this news release has been reviewed and approved by Galen McNamara, P. Geo., the CEO of the Company and a qualified person as defined by National Instrument 43-101.

Summa Silver Corp is a Canadian junior mineral exploration company. The Company owns a 100% interest in the Hughes property located in central Nevada and has an option to earn 100% interest in the Mogollon property located in southwestern New Mexico. The Hughes property is host to the high-grade past-producing Belmont Mine, one of the most prolific silver producers in the United States between 1903 and 1929. The Mogollon property is the largest historic silver producer in New Mexico.  Both properties have remained inactive since commercial production ceased and neither have seen modern exploration prior to the Company’s involvement.

ON BEHALF OF THE BOARD OF DIRECTORS

This news release contains certain “forward looking statements” and certain “forward-looking information” as defined under applicable Canadian and U.S. securities laws. Forward-looking statements and information can generally be identified by the use of forward-looking terminology such as “may”, “will”, “should”, “expect”, “intend”, “estimate”, “anticipate”, “believe”, “continue”, “plans” or similar terminology. The forward-looking information contained herein is provided for the purpose of assisting readers in understanding management’s current expectations and plans relating to the future. These forward‐looking statements or information relate to, among other things: the release of assays, and the exploration and development of the Company’s mineral exploration projects including completion of surveys and drilling activities.

Forward-looking information is subject to known and unknown risks, uncertainties and other factors that may cause the actual actions, events or results to be materially different from those expressed or implied by such forward-looking information, including but not limited to: the requirement for regulatory approvals; enhanced uncertainty in global financial markets as a result of the current COVID-19 pandemic; unquantifiable risks related to government actions and interventions; stock market volatility; regulatory restrictions; and other related risks and uncertainties.

Forward-looking information are based on management of the parties’ reasonable assumptions, estimates, expectations, analyses and opinions, which are based on such management’s experience and perception of trends, current conditions and expected developments, and other factors that management believes are relevant and reasonable in the circumstances, but which may prove to be incorrect.